The headline paints a crazy picture, doesn’t it?

Having all but taken complete control of the Internet in recent years, Google seems poised to add global dominance to its list of impressive accomplishments in the not-so-distant future.

Hold the phone there, Sparky—not if Bing has anything to say about it …

With revenue reports being released after each quarter, the likes of Microsoft and Yahoo! are slowly, but surely proving to be key players in the greater search advertising industry.

In 2015, Bing Ads saw tremendous improvements, growing to claim 19.7 percent of the US search market share. Don’t get me wrong or anything—as of 2017, Google is still the all-knowing, omnipresent king of paid search …

That said, not all is “peaches and cream” down at Google. Between 2014 and 2015, on Google AdWords, paid search clicks went down 11 percent—making up lost ground hasn’t been easy …

Will AdWords rebound? There’s no doubt in my mind.

Still, there must be something behind all of this, right? In my own head, after seeing these numbers, I began thinking to myself, “What does Bing Ads have that AdWords doesn’t?”

It’s a fair question. Better yet, I think I might have the answer …

Yes, I’m a digital marketer with a wealth of talents and tools in my professional arsenal, but my bread and butter has always been pay-per-click (PPC) advertising—I love its efficiency.

As such, I’ve helped many businesses improve their PPC advertising. What’s amazing, however, is that they almost always overlook BingAds, opting instead to focus solely on AdWords.

This isn’t necessarily the smartest way to go about things …

Why? Bing Ads isn’t nearly as crowded as AdWords. As such, when search terms are auctioned off, there’s less competition, better ad positioning and cheaper cost-per-click averages.

Back in 2013, the paid search community wasn’t too pleased with AdWords when Google announced that all advertisers would be forced to migrate to Enhanced Campaigns.

Basically, this meant (and means) that, by default, paid AdWords campaigns would automatically target all desktop, tablet and mobile devices—doesn’t sound like too bad of a gig, right?

No, the update wasn’t awful, but it also meant that—though users could adjust their bids for some mobile devices—they couldn’t for tablets, and they also couldn’t bypass desktop searches.

As far as campaign management is concerned, using AdWords, advertisers have two options:

Notice anything missing, there?

No worries, young Padawan—Bing Ads gives advertisers more options. They can target Bing and Yahoo, only search parters or even both at the ad group level—the choice is yours.

But that’s not all—remember how AdWords doesn’t allow you to see which search partners are driving traffic to your site? With Bing Ads, running a report on this kind of thing takes seconds.

It’s been over two years, but with many ads now including the number of Twitter followers next to the link to a company’s homepage, they must’ve liked what they found. 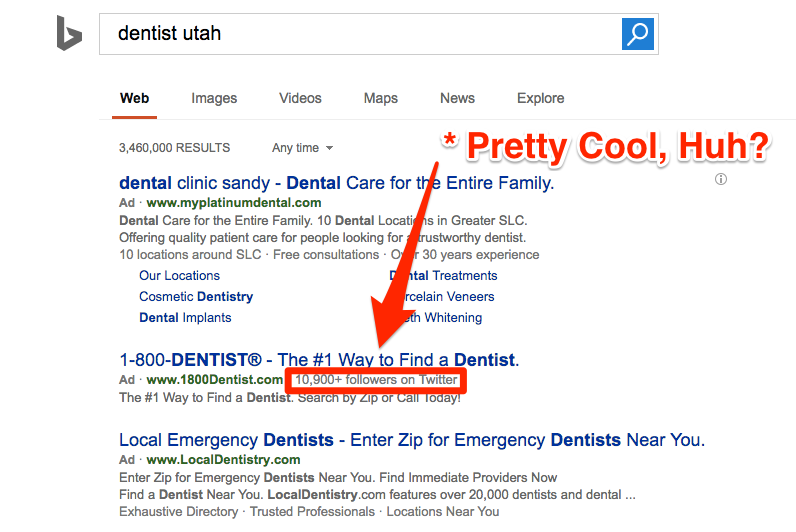 AdWords does something similar, but instead of including popular social networks like Twitter, they’ve chosen to toot their own horn, touting an advertiser’s number of Google+ followers.

Really? I mean, when was the last time you actually used Google+? That’s what I thought …

Of the six items mentioned on this list, this one alone isn’t likely to have die-hard AdWords fanatics jumping ship for Bing Ads anytime soon, but it’s certainly a nice touch.

Close variant matching is a means through which AdWords intended to help advertisers expand the reach of paid search terms to misspelled words, plurals and grammatical stemmings.

For years, close variant matching was an option for AdWords users. In August of 2016, however, AdWords decided to make the use of close variants a force-fed item—everyone had to use it.

Needless to say, in certain circumstances, this can be pretty annoying …

For PPC peeps using Bing’s platform, it’s still an option. With the mere click of a mouse, advertisers can select or deselect close variant matching at the campaign or ad group level.

AdWords gives marketers the power to view and control demographic targeting in the Google Display Network. This is great, but when it comes to search, things take a turn for the worse …

Shockingly, to date, AdWords offers no demographic-based search network to speak of.

Bing Ads does, and though it continues to remain one of the tool’s most underutilized features, the ability to control which gender and age demographics see your search ads is awesome.

Similar to close variant matching, this key advertorial component can be controlled at the campaign or ad group level. Don’t overlook this massive benefit—use it to your advantage.

Turning the Tables—What Do You Think?

You’ve been to one of those awkward parties where a complete and total stranger approaches you with 30 minutes of talking material, right? No matter what, you can’ seem to shake ‘em …

Listen, I love talking in great detail about both Bing Ads and Adwords. Heck, with a willing, patient audience, I’ll even go as far as rambling on endlessly about AltaVista—crazy, huh?

That said, at the risk of taking the shape of one of those annoying partygoers, I’d like to flip the script on this post—I’ve said my piece, and now it’s time for you to say yours …

In the comments section below, whether you’re an entrepreneur or digital marketer by trade, talk with me about the kinds of PPC experiences you’ve had with Bing Ads …

The good, the bad and the in-between.

As will always be the case, I’ll stop by periodically to interact with each and every one of your comments. Until then, thanks for reading, and have a killer-cool day making PPC magic happen!